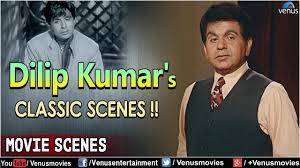 Anybody has heard of Mohammed Yusuf Khan? The answer may be a hesitant- no. Unless they have somebody known to them by that name as a friend acquaintance, relative etc. Now, has anybody heard of Dilip Kumar? The answer in unison would be YES! From Kashmir to Kanyakumari, it would be the same answer. The reality is that both are one and the same person. The former is the actual name while latter is the screen name.

Dilip Kumar is one of the most famous actors that Bollywood has produced and commanded one of the highest level of popularities in Indian cinema. He is known as the Tragedy King for his enactment of serious and tragic roles. Another sobriquet given to him is – the First Khan. This is because he was the first of the Khan Surname in the Bollywood which after that saw many more Khans in the Hero pedestal.

There are many movies of this all tome great icon of Indian cinema that is still classic in every sense. Through the Vidmate app, download them to the mobile storage and watch them, ideally over the weekend. Relive the great legend of Bollywood.

Born in Peshawar (present day Pakistan), he was part of the same neighbourhood that would produce another great star of Bollywood – Raj Kumar. Both were known to each other from the early childhood days. In the early 1940’s, Dilip Kumar migrated to Bombay ( Mumbai) to start his professional career. His entry to the movie arena started as an association with the Bombay Talkies. In the beginning, he was more into scripting due to his command over the Urdu language. The Hindi movies in those days and even today has a heavy usage of Urdu words and lines in its dialogues.

Dilip Kumar’s debut as a hero was in the year 1944 through the movie Jwar Bhata. It was the movie Jugnu, a couple of years later that gave him the desired visibility through its commercial success. Soon after, he would come in the 1949 movie Andaz along with two other mega stars Raj Kapoor and Nargis. This was another major success movie. The movie was directed by the famous Mehboob Khan.

It was the 1950’s that established him among the top names of the industry with a succession of hits.  Most of them were romantic tragedy movie and thereby the title mentioned in the beginning. These movies included Daag, Amar, Insaniyat, Shikast, Devdas, Naya Daur, Madhumati. The movie Devdas was remake of the first one in which K L Saigal played the lead role. It was based on the famous novel by Sharad Chandra Chatopadhayaya.

In order not to get stereotyped only in tragedy roles, the actor also made appearances in other comedy and light hearted movies like Aan and Azaaad. During the decade, he paired with all the leading heroines of the industry. By the end of 1950’s, he had become the highest paid actor in Bollywood.

All these movies are truly memorable and it warrants that at least a couple of them be watched even today. There is a hectic pace of life, these days, no doubt, but use the Vidmate and go ahead with a fast download to the mobile phone. Then watch, when time permits.

In the year 1960, Dilip Kumar played the role of prince Salim in the epic historical movie Mughal-E-Azam. The movie was one of the biggest blockbusters of the decade and in collection terms was broken only after almost ten years.

Use the Vidmate app to download and watch and this great movie.

In the 1980’s the actor with age started coming more into father roles where again he made his mark through movies like Vidhata, Shakti, Karma. The 1991 movie Sudagar was perhaps his best role as a character actor.

Dilip kumar is the winner of 8 filmfare awards. The government conferred the DadSaheb Phalke Award on this legend for his contributions to Indian cinema.