Certainly, it is a wonderful feeling to watch Bollywood movies shot in unusual locations all around the globe. But nothing beats the excitement of spotting India in a Hollywood film. Indeed, there are many Hollywood movies that have been shot in India.

Here are some popular movies that have partly or wholly been shot in India.  The interesting part is how our country is depicted in some of these movies. 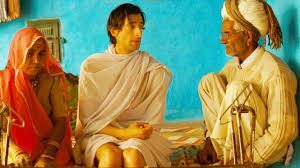 It is a comedy-drama oriented film about spiritual-self-discovery of three brothers who reunify on the train to Darjeeling. The director of this movie, Wes Anderson, said his motivation for this movie was Satyajit Ray and various other documentaries on India. Apart from locations from Jodhpur, you can also spot Irrfan Khan in this movie.

A biographical drama movie that is based on Steve Jobs played by Ashton Kutcher has a few of the parts that were shot in Delhi and Vrindavan. It catered a backdrop of Job’s 1974 trek to India. You must not be surprised in case you spot locations around ChandniChowk or even that of Red Fort.

Deeply revolving around India, this romantic comedy-drama featuring Julia Roberts was shot in various parts of Delhi and Pataudi. On her search for illumination, she ends up going to an ashram in India. This is a must watch for people who wish to have a peek into the power of prayers in India.

It is a biographical sports drama movie that is about baseball pitchers Rinku Singh and Dinesh Patel. It was partly shot in Mumbai. The music of this movie is an interesting mix that has been composed by A.R. Rahman.

Now this one is a movie that you might have already knownabout, right? Directed by Danny Boyle, this version of a Q & A by VikasSwarup won plenty of accolades. It has been picturisedin the Juhu Slums of Mumbai. The movie stars Indian actors including Anil Kapoor, Irrfan Khan and even that of Frieda Pinto.

The second of the spy movie series was shot in Goa.   You can find various scenes of this movie in the different place of Goa. If you have watched this Hollywood movie then you already know what is being said here. Otherwise, you can go check this movie out.

This fourth installation of this trendy action spy series had scenes in the tracks of Mumbai. The movie also featured Anil Kapoor as BrijNath. Isn’t it pretty awesome?

This is a drama film that was directed by Michael Winterbottom. The plot needed shooting in Karachi but because of safety reasons; those scenes were got picturised in Pune. Yes, your Pune can be seen in this movie.

Thus, do Vidmate app download install new version and get all these movies on your android device. Vidmate app gets you all the formats and resolutions in your desired movies. The quality is remarkable too.